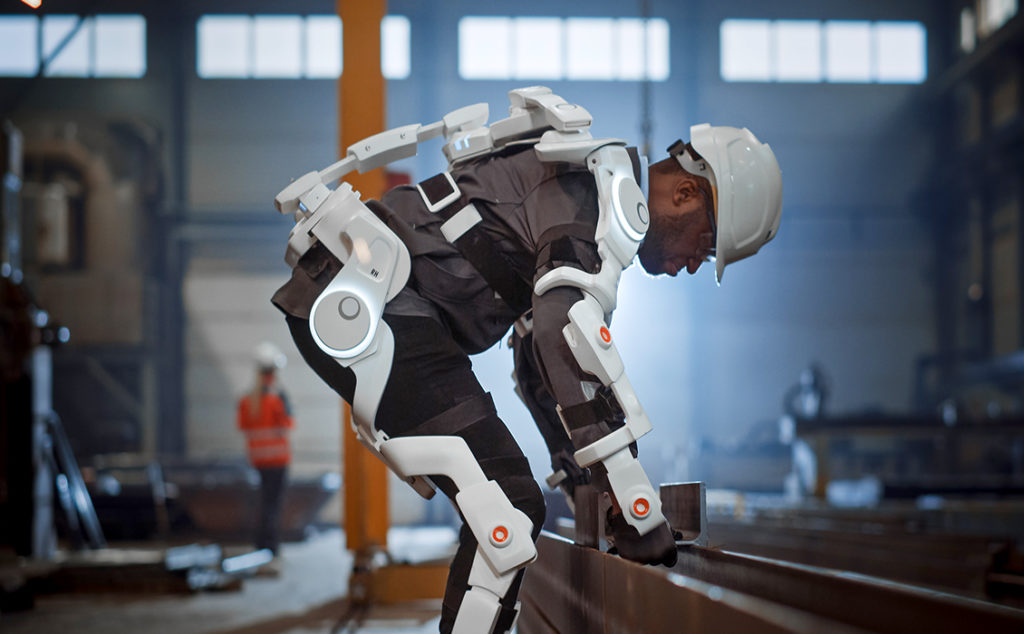 Innovations are transforming the construction sector at an unprecedented pace. From additive manufacturing to sustainable materials, robotics and AI, builders are reaping the rewards of new technologies to work more efficiently, safely and sustainably.

Yet the uptake for one of the most promising innovations has lagged behind that in other sectors. Exoskeletons are external frameworks that augment the body to provide extra strength, movement or endurance. For construction workers, they could offer reduced strain and fewer injuries from manual handling. For companies, that could translate into multiple benefits, from cost savings to improvements in quality and compliance, and fewer workdays lost to injuries.

Bill Billotte leads ASTM International’s Center of Excellence for Exo Technologies, which is working to advance the exo technology industry:
“For the most part, we’re still in the early adoption phase for the construction sector. There are a few construction-focused exoskeletons out there – we’re seeing primarily passive suits being used for a range of purposes, from overhead work to lifting and repetitive tasks. But they’re not being used as widely yet as in some other industries, like manufacturing. So there’s a lot of potential for growth.”

Increasing adoption may start with dispelling some myths about the technology. In movies, exoskeletons give their users superpowers. But it’s more helpful to think of them as wearable tools, says Nora Nimmerichter, staff manager for the ASTM International exoskeletons and exosuits committee.

“You wouldn’t think a hammer or a lever or a crowbar makes you superhuman, but they certainly help you do a lot more work than you can do with your hands alone. If you’re lifting a 100lb box, you might be able to do it one-handed using a powered suit. With a passive suit you might lift it normally, but you’re a lot less likely to get hurt.”

It’s this ability to do the job without putting your health on the line which makes exo technology potentially so attractive for construction – where non-fatal injuries cost around $7bn a year in the US alone. Exoskeletons offer benefits for any activity that takes a toll on the body. As well as supporting workers to carry and move heavy loads, exoskeletons are being used to take the strain of repetitive tasks than can lead to injuries over an extended period. That brings other advantages, explains Nimmerichter:

“Exos can increase endurance and reduce fatigue, which has an impact on performance. Companies are seeing better quality and compliance, because workers are not getting as tired carrying out a job.”

Big players have entered the market in recent years. Hilti partnered with medical technology company Ottobock to produce a passive upper body exosuit for overhead work, and Sarcos has developed a full-body, powered exoskeleton targeted at solo laborers needing to lift, move and manipulate heavy loads. Use cases differ from manufacturing, where workers are usually in a controlled environment. Billotte sets out the challenge:

“On a construction site, exoskeletons have to be able to cope with variable climate and terrain, and be used safely alongside other tools, vehicles and PPE. A construction worker is usually going to be wearing protective clothing, and they might also be using fall protection and a respirator. It’s vital that an exosuit can be used safely and doesn’t interfere with any of that gear.”

Industry-specific testing, guidance and training has a critical role to play in creating and disseminating best practice. ASTM’s Center of Excellence is forging partnerships and programs to build confidence and speed adoption in the construction sector – not easy, says Billotte, when things are evolving so fast.

“Exo technologies went from 0-60 overnight. We’re still in the innovation cycle for exoskeletons, and the models are changing very rapidly. That’s great for early adopters and champions, who are happy to jump on board with each improvement. But it’s much more challenging for large companies investing in the technology.”

Big construction firms who may want to buy 5,000 or 10,000 exoskeletons have different expectations and requirements from those buying just one or two suits. They need assurance not just about safety testing, but that support and training will be available when it’s needed, now and in the future.

The gap between innovation and mass market adoption is often a ‘valley of death’ for emerging technologies. But ASTM’s growing expertise in this area is helping them to bridge the gap – and to construct those bridges faster than ever. In exo technologies, that means taking a leaf out of the construction industry’s book, and making use of the tools and materials that are on site now. Nimmerichter elaborates:

“Everybody wants more testing and certification, but the laboratories aren’t set up for exo right now. So we’re focusing on the capabilities and resources that we have, working with leading researchers to develop global standards, and also making connections with laboratories and construction workers so that when they’re ready, we’ve already lined up everything they need to hit the ground running.”

A key partnership has been with the Laborers’ International Union of North America (LiUNA). As champions of safer job sites, LiUNA have been in the forefront of construction lab and field testing for exoskeletons. They also train thousands of tradespeople every day, making them the perfect partner to help create and roll out education and certification across the industry.

“Right now, they’re involved in research, testing innovations and assessing what’s going to work best in a construction environment. We’re also developing content on exoskeletons that will be part of LiUNA’s educational offer. Eventually, they’ll be training workers on the exo technologies that they’ll be using on site.”

One thing helping to speed progress is how strongly motivated all the stakeholders are to see the workforce reap the benefits of exoskeletons. Billotte recalls the example of a painter employed on a multi-week job:

“Previously, this guy was exhausted at the end of a day’s work. He’d be going home and have to lie down, maybe take some painkillers. Once he started using the exoskeleton, he was going to the gym after work. It completely changed his quality of life.”

Exo technologies are poised to become one of the construction industry’s most exciting and important innovations, giving workers the chance to have longer, more fulfilling and injury-free careers.